This year Roberto Nuti Group awarded the 11th SABO ROSA award, which is a prestigious prize that the Group gives every year to a female truck driver in occasion of the International Woman Day (in Italy is always on the 8th of March). The woman who won the 2020’s edition of SABO ROSA is Stefania Bartolini from Imola, a small city close to Bologna, Italy. She have been a truck driver since she was 19 years old and nowadays she delivers especially goods for the agricultural, ceramic and manufacturing sectors driving her truck between Piacenza and Ravenna provinces.

The idea of giving a recognition to women’s hard work of this industry, which was a sector mainly held by men, was thought up by Massimo Nuti, President of Roberto Nuti Group, in 2010. In the first year of this initiative the SABO ROSA award was given proudly to Elena Scognamiglio, a firefighter who was in service around Dozza area driving heavy trucks. “My dad was a truck driver and both my uncles and cousins are truck drivers too. Everyone of my family was wishing me to get into the trucking family business and for this reason I had already the necessary driving license at 21 years old.” told us the woman who was one of the first women to get into the National Corps of Firefighter in Italy: “At the very beginning it was very hard. My colleagues didn’t trust me and I had to prove them all my commitment towards my new duties. Now I feel like a queen. My colleagues estimate me and I can tell that I love what I do.”

The award SABO ROSA has always been assigned by the female staff of the Group since the first edition. The female employees of Roberto Nuti Group choose the winner after a first session of online voting, in which everyone can take part into it.  In 2011 the award was assigned to Daniela Cappelli: a wife, a mother, a grandmother, a truck driver from Toscany and even during that year she was also the president of the Group of Venturina’s (Livorno) Truck Drivers and advisor of Federtrasporti administration sector.

Gisella Corradini, from Modena, won the SABO ROSA award in 2012. She was also a truck driver and spokesperson of the group “Good Road lady truck driver team”, an online blog in which her colleagues and she were meeting, were socializing and were shortening the real distance between each others. “The group is a reality which we really care about – told us Gisella – and it came up to give a positive side to the female truck driver figure, which usually is painted negatively in the reality. Often people think that the trucking and logistics field is just made by men but it is not true. Lot of women are taking part into this working field especially into the small logistic distribution. ”

In 2013 the award was given to Agata De Rosa, originally form Naples but living near Bergamo. This was a very special time to celebrate this award because the winner came to the headquarter of the Group with her own truck, a Scania personalized with different illustrations. “I have been interested to the truck world since a very young age also because my dad was a truck driver. I am 32 years old now and I am driving since I was 14. After I got the B driving license, I also got the E driving license at 21 years old. I started driving with my truck nationally and I had also to transport explosive for the Italian army. My dad died when I was 23 years old and I kept working alone, until I got to know my actual husband who has given me the chance to start driving around Europe as well.”

Marianna Dal Degan was awarded in 2014. Marianna is from Verona and she is working both as truck driver and a spare parts dealer in a workshop. “I really like heavy trucks and one of my passions is  taking care of the maintenance all spare parts. Eight years ago – told us Marianna – I tried to drive a heavy truck and I immediately felt in love with this job. In 2013 unfortunately I had an accident while I was driving. Afterwards the transportation company I was working for closed down because of financial crisis. Despite my misadventures, I still keep driving heavy trucks and working in a company of spare parts for trucks.”

In 2015 Rosa Di Gregorio, from Vicenza, was awarded with the fifth edition of SABO ROSA. “I have know SABO ROSA award since it was created – she told us – and I have alway found very interesting this idea because nobody has ever thought to award a female truck driver. After so many years of hard work, it is an honor and a big satisfaction for me to be chosen as the female truck driver of the year. I receive this award as a great achievement of my career. This is a prize which gives me the thought to be completed”.

Giulia Saligari, who won SABO ROSA award in 2016, is remembered both for her young age (22 years old) and because she was working in a transportation company chain and she wasn’t a truck driver. “I am working with my dad and despite all everyday issues I feel that I am working well and with serene mindset – said Giulia -. I have been following the SABO ROSA awards for 2 years now and I decided that I was going to take part in this competition this year to give me a chance. I have been growing up during these past years and I still can’t believe that I am the winner of 2016 award.”

In 2017 it was the Ethel Bianchi‘s time to win the award. It was the first tie that a female international bus driver was winning SABO ROSA award. “It means a lot for me to receive this well-known prize – told us Ethel – because there is a company that is finally acknowledging women value in this difficult and mainly masculine transportation sector. This is very rare to receive rewards in this field and for this reason I am so grateful to Roberto Nuti Group. This is an award that I dedicate to the company Linea Azzurra of Moncalieri in which I have been working.”

In 2018 the award SABO ROSA was given to Laura Broglio. We remember her both for being a young truck driver and for gaining more than 3.000 votes online. “I really want to thank everyone who voted and gave me the chance to get to the finals and I also thank a lot Roberto Nuti Group that chose me as the new female truck driver of the year 2018 – said Laura -. My passion for heavy trucks started casually. One day a group of friends took me to a convention of heavy trucks and I tried to get on a tractor just for fun. That moment gave me the exciting feeling to get the license in order to start driving it. Since that moment I have kept growing this interest which has then become my life job. What’s helping me thought this job is that I have always been an adventurer”.

Alessandra Lucaroni was the winner of the tenth edition of SABO ROSA in 2019. Alessandra is the owner of the historic family spare parts workshop “Ormia” in Fiano Romano and it is specialized in Scania heavy trucks. “I wish to dedicate this award to my father who started this spare parts workshop and gave me the opportunity to become the owner of it. My father has shared with me his love for mechanic and he has always trusted me, my projects and my ideas – said Alessandra -. Since I was a child, I have always been the ‘boyish’ daughter of the family and I had been growing next to my father who was repairing transportation of the army.  Since then I felt in love with this job. I still remember the great feeling when my father gave me the chance to get on a army transportation.”

We are very happy that the history of SABO ROSA award and recognition has been going on during these eleven years. We hope that this tradition will go on many years more in order to support and to emphasise all women that work very hard and want to start a career in this field. 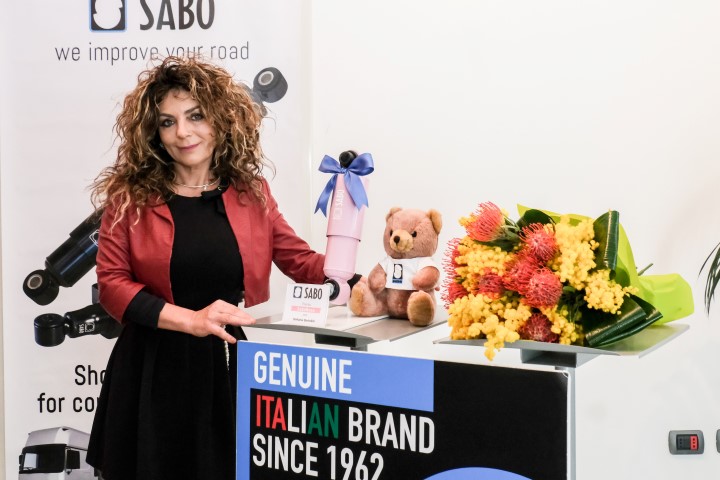 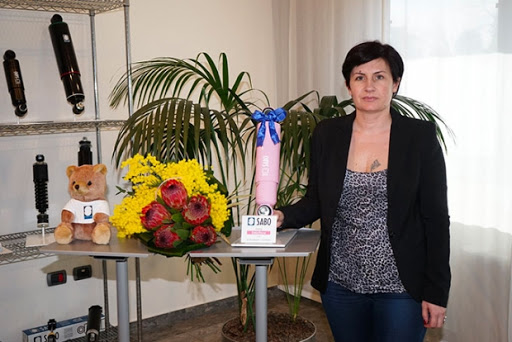 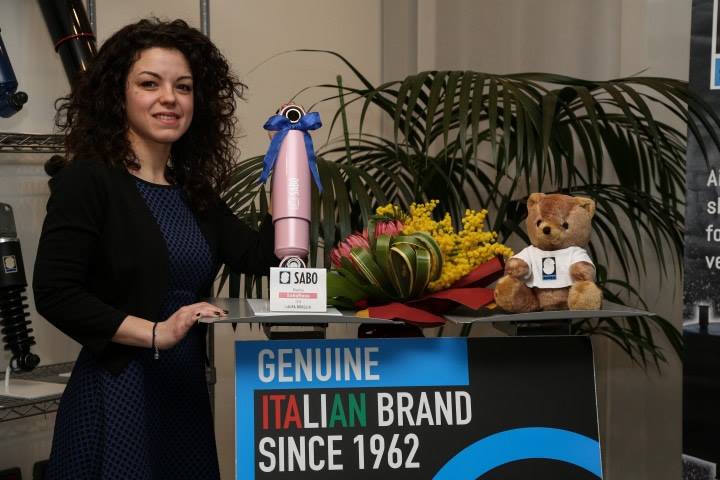 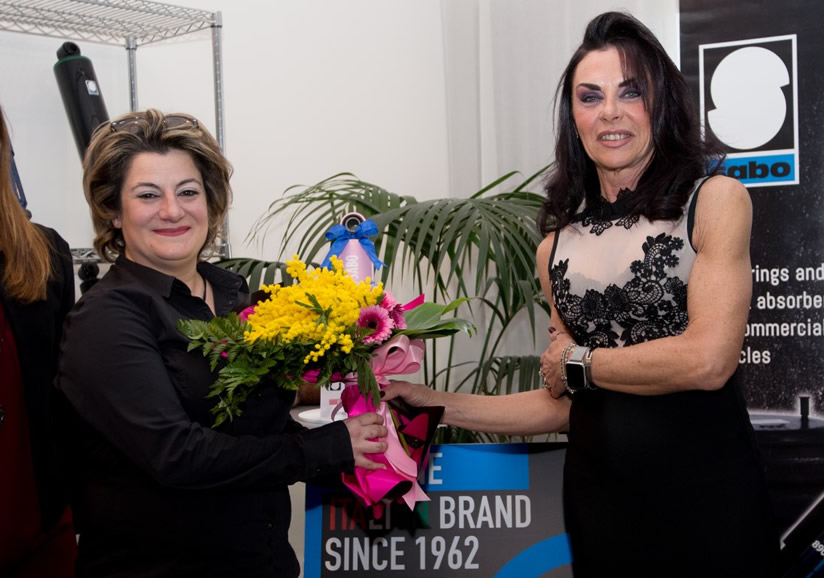 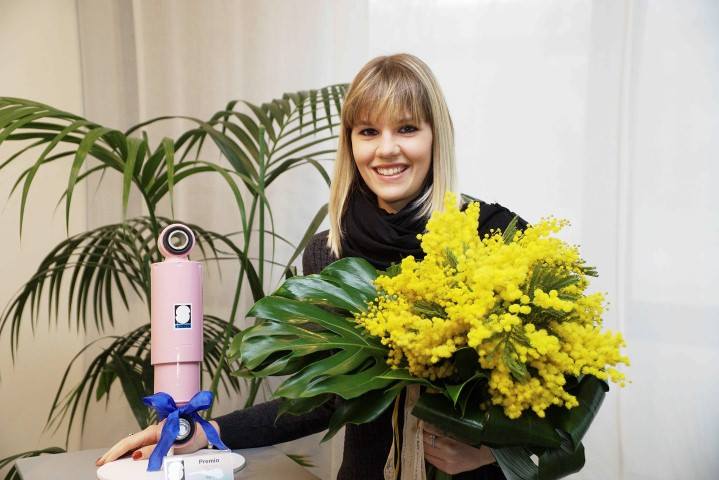 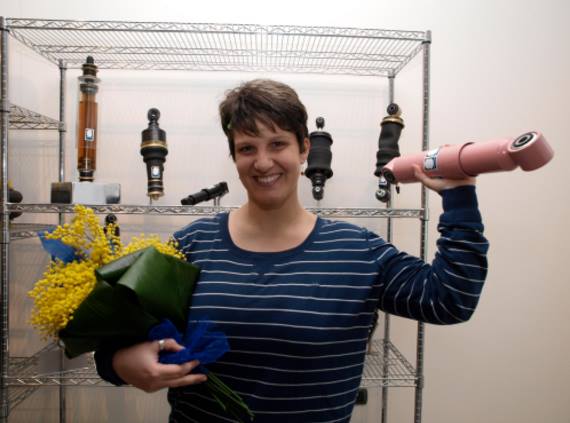